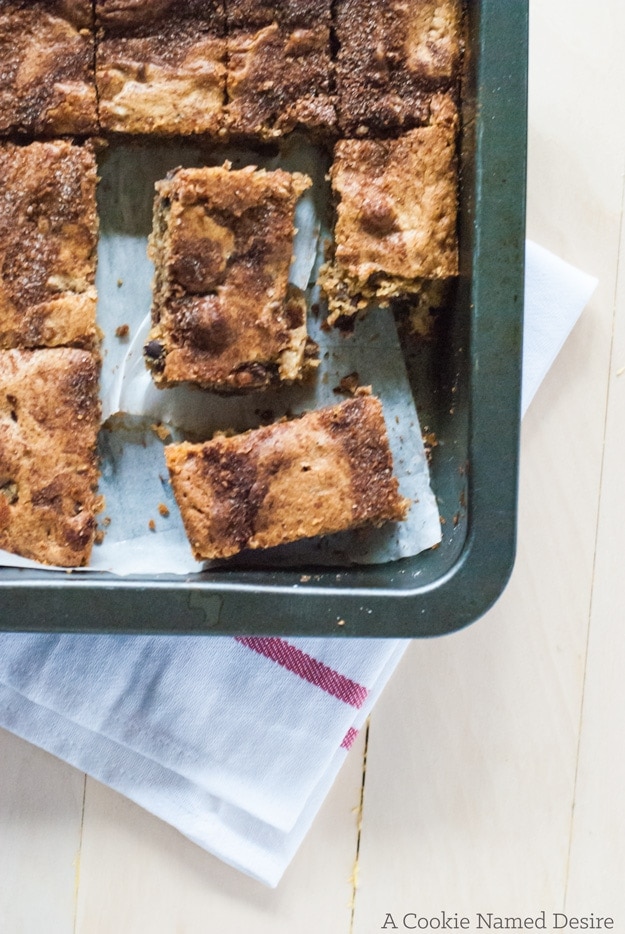 So while I was strolling around the World Market I came across a jar of peeled chestnuts and I knew I had to do something fun with them. Really, I did a few fun things, but this is the first one I am sharing with you. It was so hard to come up with a name for these blondies without it being too much of a mouthful. I think "Snickerdoodle Chocolate Chip & Candied Chestnut Blondies" does an alright job even though I didn't get to mention the fact that these are also made with brown butter, but one feature had to be nixed and that was the one I chose because adding the words "brown butter" to the mix is just a little too much to say. I'd rather just skip titling altogether and simply just hand you one of these incredibly delicious bars and a glass of milk or hot chocolate and be done with it. 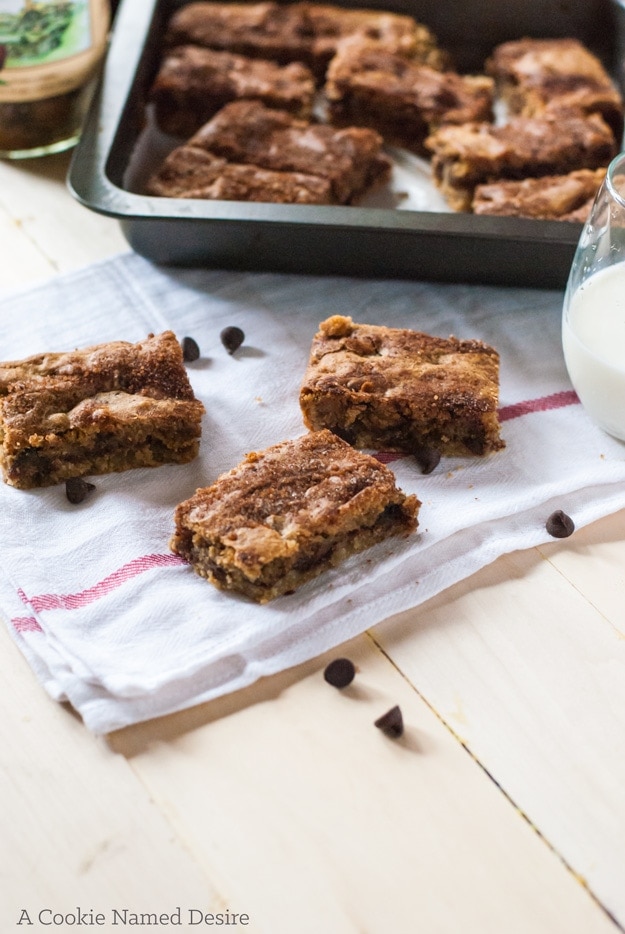 These bars are super gooey and smell like nutty cinnamon heaven coming out of the oven. The candied chestnuts become a little chewy after baking and go perfectly with the nuttiness of the browned butter. I can't say enough about how amazing these bars are. You need them in your life. Your family needs them. Heck, I need them!!

Excuse me while I wipe the cinnamon sugar of my cheeks.

I've been in full Christmas mode recently and have made about a dozen different kinds of cookies in the past week. I am drowning in sugar and butter and my sister and her boyfriend are convinced I am trying to fatten them up for some secret sinister plot. The answer is yes, yes I am plotting. Mwahahahaha. Plus, her boyfriend loves my desserts. Did I tell you how he asked if I could bake his birthday cake instead of my sister? Stuff like that makes me laugh so much. 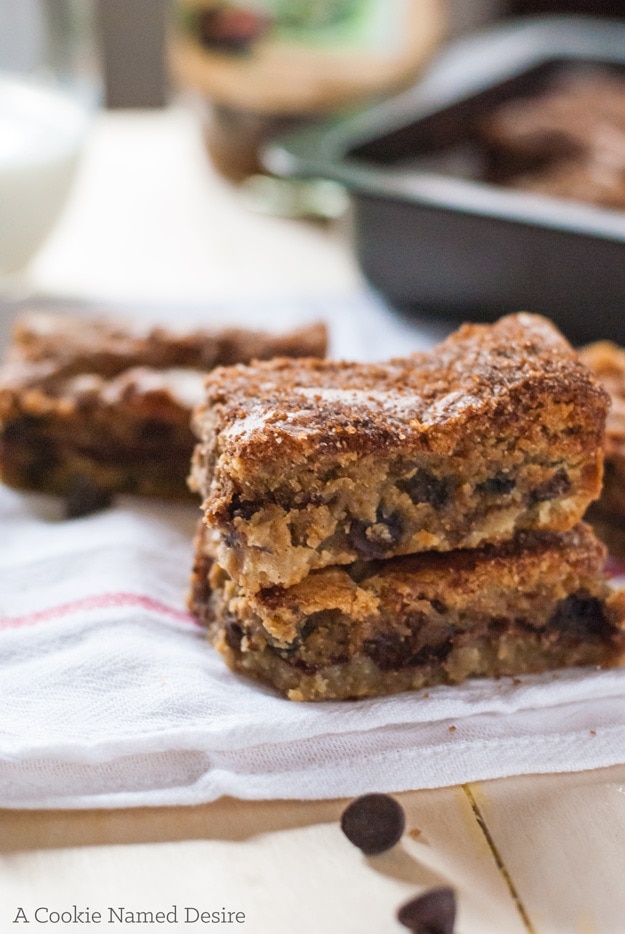 To be honest, until last year, I was never really into making cookies for Christmas. I liked the idea, but always thought the execution would be too much for me to handle. As it turns out, as long as I have enough butter, I can pace myself pretty well and I can't  get enough of it! There is one recipe I need to hunt down and make that has eluded me for the longest time though.

A few years back, my sister's friend sent home a huge plate of Christmas cookies and in them was this delicious gooey lemony bar that I have dreams about. And you know how obsessed I am with lemon desserts. I've asked for the recipe so many times - even when she stopped hanging out so much with my sister. I needed and still need that recipe. None of the recipes I've found online come near what this was. It was a cross between a lemony blondie and a lemon bar and a cheesecake slice. It was absolutely heavenly and I will not stop until I get that recipe. 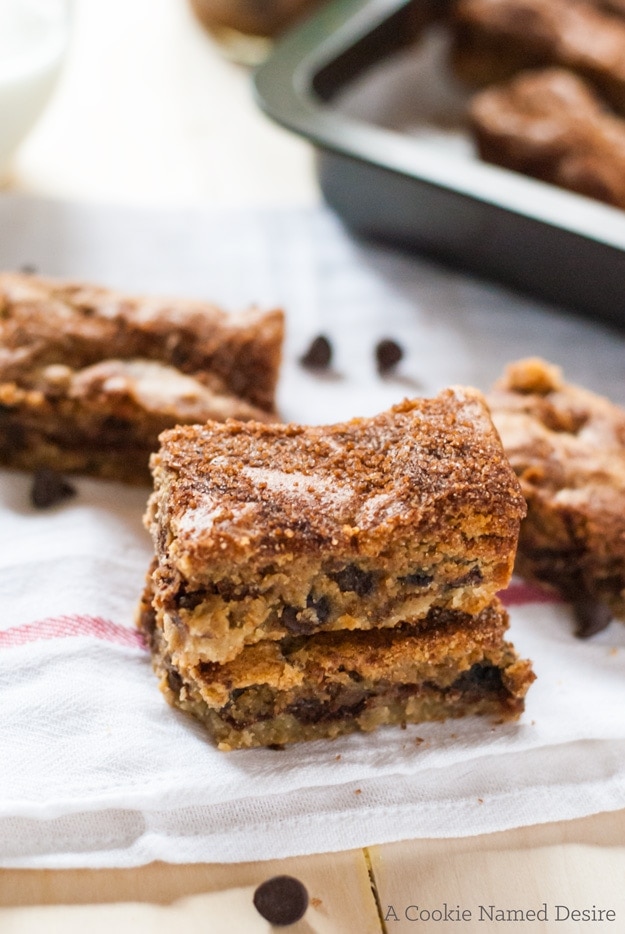 These snickerdoodle chocolate chip & candied chestnut bars are pretty darned good as it is and will tide me over very well.  I mean,how can you resist such holiday gooey deliciousness? I could live off these bars if diabetes wasn't so prevalent in both sides of my family. Stupid genetics.

Anyway, can you believe that in less than a week, it'll be Christmas? I've been preparing for this day forever, but I still feel like it's crept up on me! Where does the time go? Baking a million of these bars, that's where. 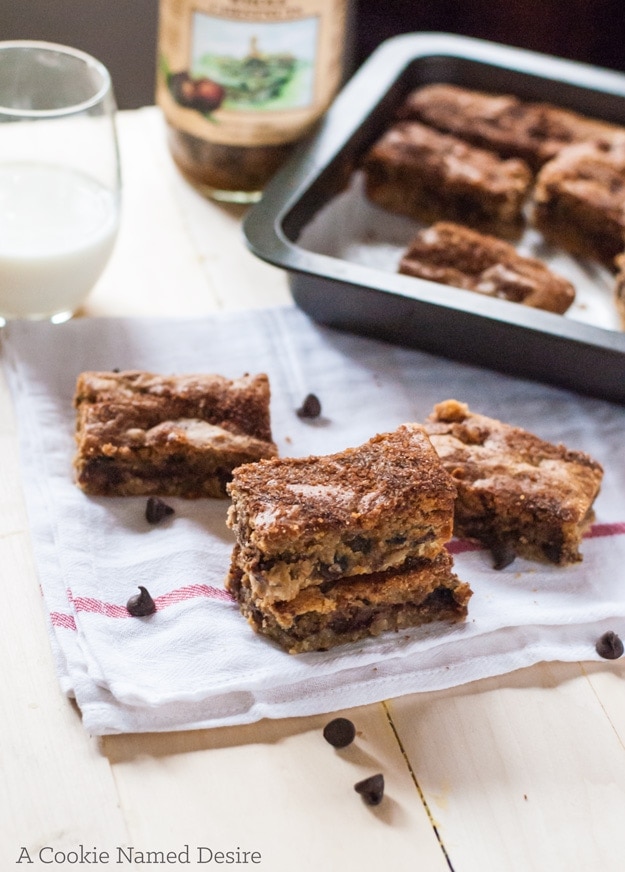 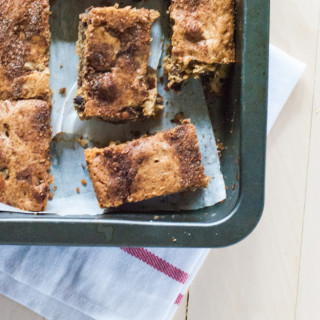