Apple bread gets a makeover! Instead of spending an hour baking a loaf of apple bread, give it the waffle treatment and make these crunchy on the outside, but fluffy on the inside waffles. Let's hear it for apple bread waffles for breakfast!

Sometimes I get so excited to post a recipe that I decide to put it up immediately and other recipes get pushed to the back. Other times, I make an amazing recipe, but I want to wait until the perfect moment to share it. Sometimes those perfect moments happen, but other times they come and go before I get that chance to share. This happens to be the latter. I thought I would post this during the height of apple season, so I saved it, but I kept waiting and waiting and had things come up and suddenly it's almost Thanksgiving and I still haven't shared my apple bread waffles!

The last time I made waffles for the blog, it was my favorite banana bread wafles. i thought it would be really fun to share my apple bread waffles. I love using my apple iron to convert quick bread recipes because I get to have my apple bread faster and cover it in a bunch of salted caramel and maple syrup and no one will judge me.

Like my banana bread waffles, this is a reguarl apple bread recipe that I made in the iron - not a wafle with apple bread flavors. Yes, there is a difference! It has a sturdier and crispier texture on the outside, but it is still light and fluffy on the inside. It really holds up to a lot of toppings which is great for a big fall brunch. It also means you can bake this recipe in a loaf pan and have a really delicious apple bread loaf - I do recommend omitting the buttermilk if you decide to make a loaf. I did add it in to the waffles to give it a bit more of a traditional waffle taste and tang that really tastes great with these apple bread waffles! 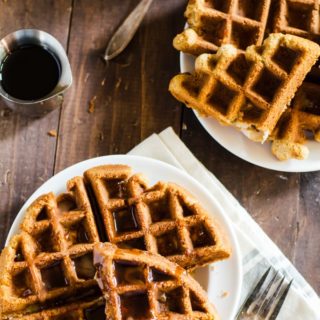 Apple bread gets a makeover! These waffles are crunchy on the outside, but fluffy on the inside... the perfect start to your morning.
Print Recipe Pin Recipe
Prep Time 15 mins
Cook Time 20 mins
Total Time 35 mins
Course Breakfast
Cuisine American