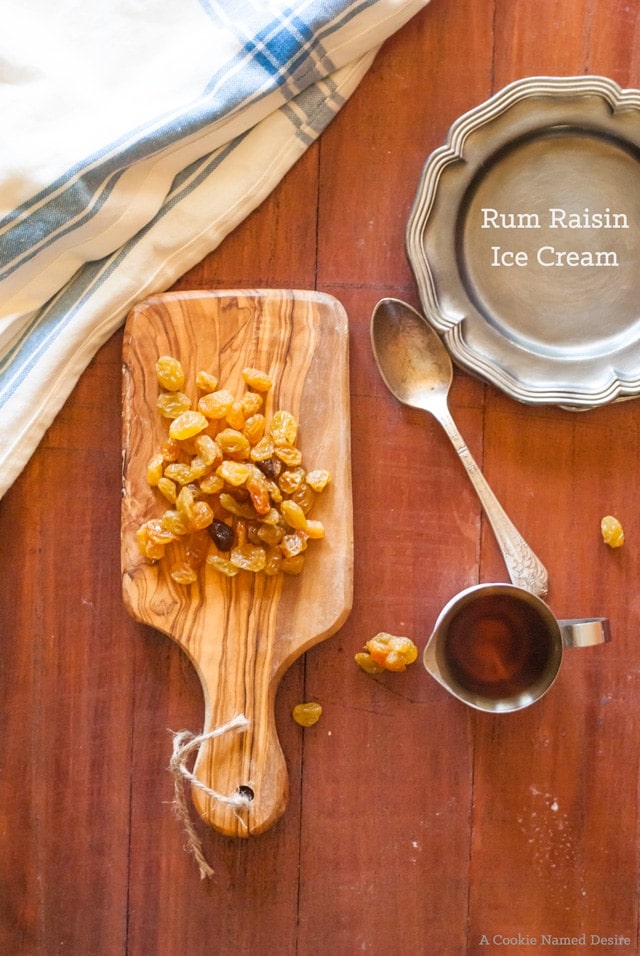 My favorite part of blogging is the relationships. I love getting to know my readers and seeing who is making the recipes. What I love more is learning that a reader is wanting for a certain recipe and asks me to share my own version for them. Such an awesome feeling. One reader asked for a rum raisin ice cream. It’s her favorite flavor of ice cream, but not a lot of stores carry it. I said that I would try and fit it in my schedule this month, but what I really did was rush off to the store to buy the ingredients and I started working on making the ice cream right away. The only reason I didn’t share this rum raisin ice cream sooner is because I had a few recipes that needed posting first. 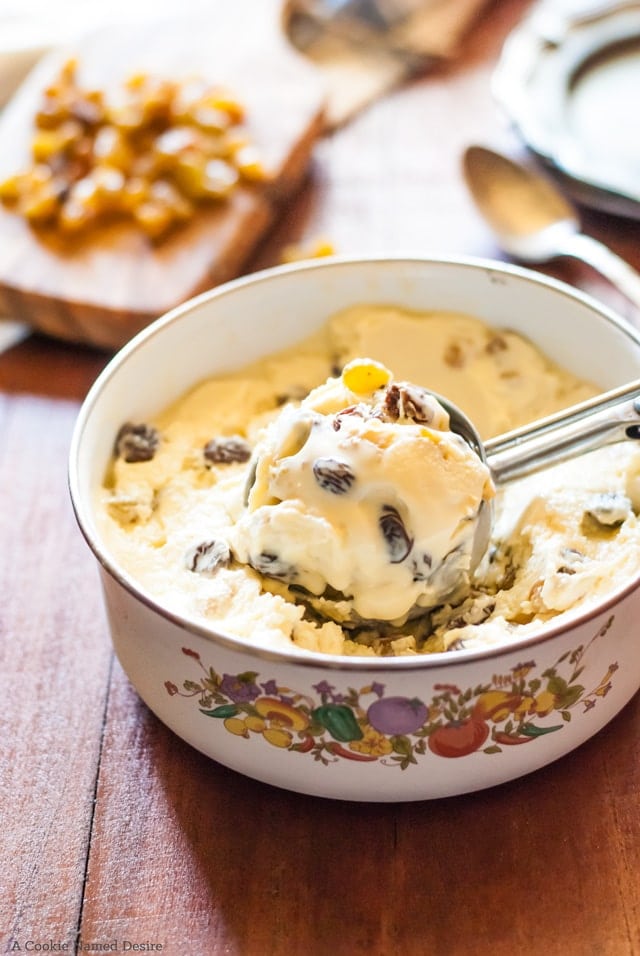 I based my rum raisin ice cream recipe from David Lebovitz’s rum raisin in his cookbook, The Perfect Scoop. My only adjustments were to amp up the rum flavor a bit, and add a few pecans for texture and a more balanced flavor. Feel free to leave them out if you want a more traditional rum raisin. Oh, and I paired it with a rum raisin oatmeal skillet cookie. I know oatmeal cookies get a bad rap because they are often confused with chocolate chip cookies. I get it. I really do. When you want chocolate, but get raisins instead, you end up disappointed and with a few trust issues. But really, oatmeal raisin cookies are quite delightful – when you know you aren’t getting chocolate of course. They are buttery, spicy, and when you infuse the raisins with rum, bake it in a skillet, and top with rum raisin ice cream, you are in for a really fun treat. 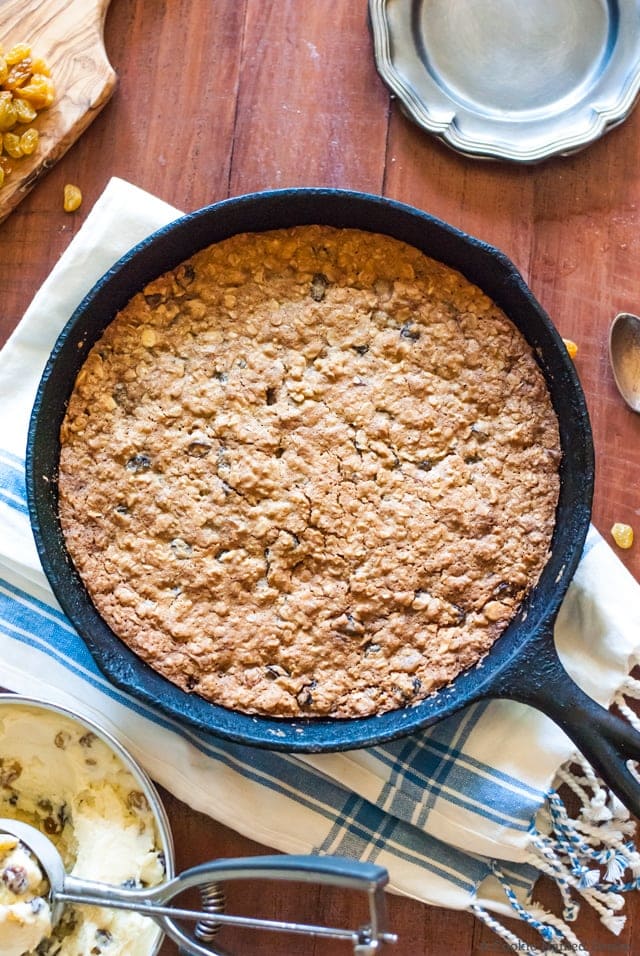 I’ve been watching a photography series on Creative Live from Todd and Diane of White on Rice couple. They are seriously amazing. Talk about photography goals and relationship goals. They inspired this photography shoot by teaching me to step outside my comfort zone a bit. I also decided it was time to upgrade my camera a step. I’ve been shooting with a Nikon D3000 (it was a quick replacement after my camera got stolen a few years back) and I am now getting a D7000. I wanted to get a D700, but decided that I would save up for that after the move. I even thought about getting a Canon, but that would mean I would need to buy new lenses as well and I didn’t want to do all that. The camera should be getting in sometime next week (maybe even by the time this post goes live!) and I am probably going to end up spending a lot of time experimenting. So excited! 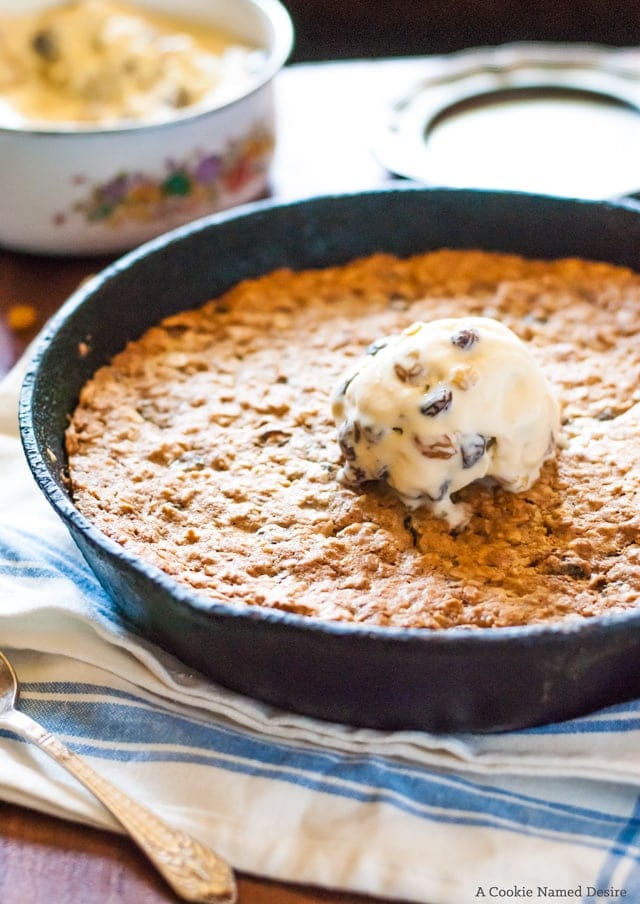 Go and make yourself some rum raisin ice cream (I won’t tell if you use extra rum, but try not to go over ¼ of added rum). And please, if you are looking for a particular recipe, please hit me up on facebook, twitter, or email!

*If you do not have molasses, you can use ⅔ cups dark brown sugar instead
**Use the same method we used in the ice cream to soak your raisins, using ½ cup, plus 2 tablespoons rum leave in any excess rum.
Tried this recipe?Tag me on Instagram! @acookienameddesire #acookienameddesire