This creamy cheesecake is an absolute dream come true. Swirled with caramel and pecans with a decadent chocolate ganache, it’s a turtle cheesecake with an irresistible almond oat crust that tastes just like the candy! This post is in collaboration with Bob’s Red Mill!

This recipe creates a smooth, incredibly velvety cheesecake base. It nearly melts in your mouth.

The cheesecake is filled with a swirl of thick, homemade caramel. I love making caramel for this recipe because homemade caramel has more depth to its flavor. You can intensify it by allowing the caramel to get a little darker, or sweeter by leaving it at a lighter caramel. You can add more vanilla or salt for added depth and dimension.

The crust is nutty with an irresistible texture that complements the turtle chocolate flavor. It adds dimension and character to the cheesecake without being pretentious or complicated.

It may initially look like there are a ton of ingredients for this turtle cheesecake. In reality, a lot of the ingredients repeat in each section.

We don’t need to go into detail of each separate ingredient, but I do want to go over a few key notes about some of the ingredients.

Patience is key! It pays to take your time with everything in this recipe from making the various components to even taking out the cheesecake from the oven.

The crust should be prebaked to get it golden brown and nutty. The more you processed the Bob’s Red Mill Old Fashioned Oats and Almond Flour, the better the final texture of the crust will be—and tastier, too!

Make sure all your ingredients are room temperature when putting together the turtle cheesecake. This is especially important when it comes to the cream cheese and the eggs so they can properly mix together without you needing to increase the speed.

Let the batter rest for a few minutes before pouring it into the springform pan. It will give it some time to deflate a little if there are any air bubbles. If you notice any air bubbles after you pour it into the pan, you can use a toothpick to pop them.

Use hot, or even boiling water when you create your bain marie—it helps with the baking process. You should also add your water after you’ve put the pan in the oven to avoid accidental spills.

If you find the cheesecake starts to brown too quickly, you can place aluminum foil over top.

You should always store your cheesecake covered in the refrigerator to prevent it from drying out.

You can freeze the cheesecake, too. Cool the cheesecake, and do not add the toppings. Wrap it well with several layers of plastic wrap and then a final layer of heavy-duty aluminum foil.

The cheesecake should last in the freezer for about three months. Allow it to thaw overnight in the refrigerator.

How do you get the top of the cheesecake smooth?

You can run an offset spatula over the top of the cheesecake before you place it in the oven. Use a water bath (bain marie) and avoid opening the oven to avoid cracks.

How long should you let the cheesecake cool before placing it in the refrigerator?

You should let the cheesecake fully come to room temperature or as close as possible first. Cover the cheesecake and store in the refrigerator to chill.

What happens if you overmix cheesecake? 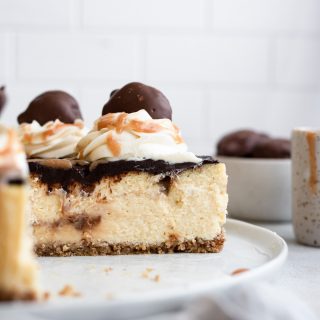