These savory palmiers are a hit at every party. The best part is they are so quick and easy to make, so they are basically the ultimate party appetizer! 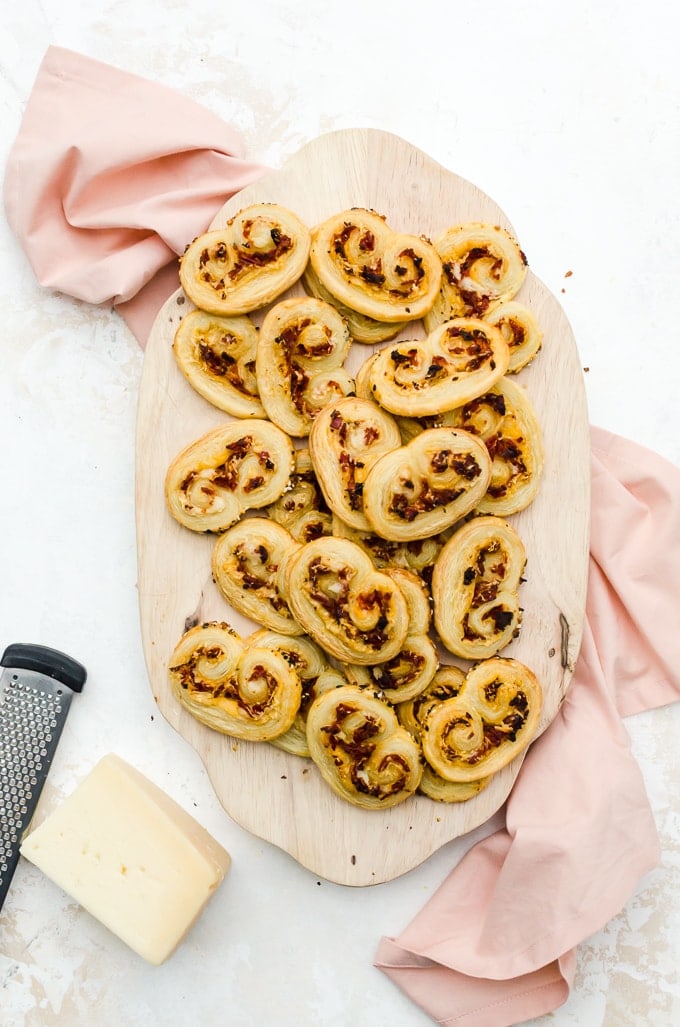 Show of hands, who goes to parties just for the food? I know it can't just be me. If I am at a party where I only know maybe one or two people, I will be cuddling the nearest furry animal while we hog all the food. There is no shame in my party game over here.

Okay, maybe I lied. There is totally some shame in my social awkwardness, but even without all that, I'd be getting down with some food at a party.

Whether I am hosting a get together with people I know, or volunteer to bring something to a party, i like to make my party appetizer something quick, easy, but still pack a punch in flavor. These savory palmiers hit all of those marks. 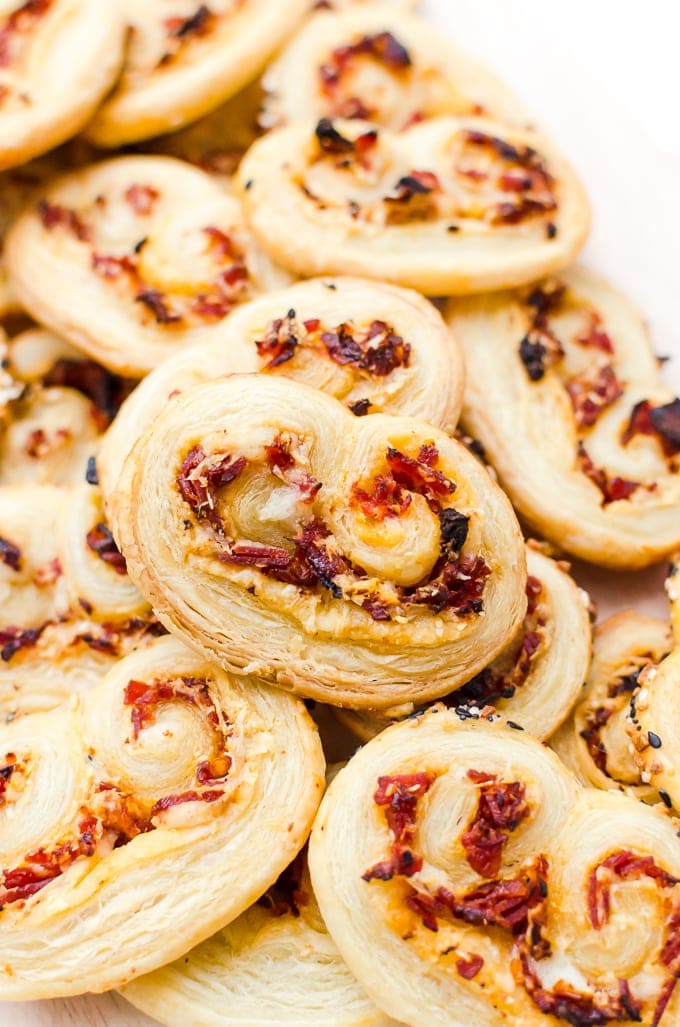 To cut back on time, we use frozen puff pastry, cause honestly, who has time for all that? These savory palmiers are appetizers for a party, so most people won't even recognize all the time and effort it takes to make something like puff pastry from scratch. Saying that, you know I am all about making what you can from scratch, so go ahead and make it if you want!

Next, we stuff these glorious bites of deliciousness with lots of cheese (Cello Parmesean and Romano for me, please!), a healthy dose of pepperoni, and some sun dried tomatoes. After we roll them up in that cute little shape and give them a quick egg wash, you can "optionally" sprinkle them with Everything Bagel Seasoning. Notice how the word "optionally" is in quotes.

That means, I say it's optional, but it's really not. It adds something extra to the flavor profile in my opinion and without it, these savory palmiers are delicious, but not OHMYGODTHATSAMAZING delicious. Also, I know now everyone has access to everything bagel seasoning (I bought mine from a store that's an hour away because I am crazy like that, but also, I just so happened to be in that area at the time).

The good news is also that you can make your own everything bagel seasoning. 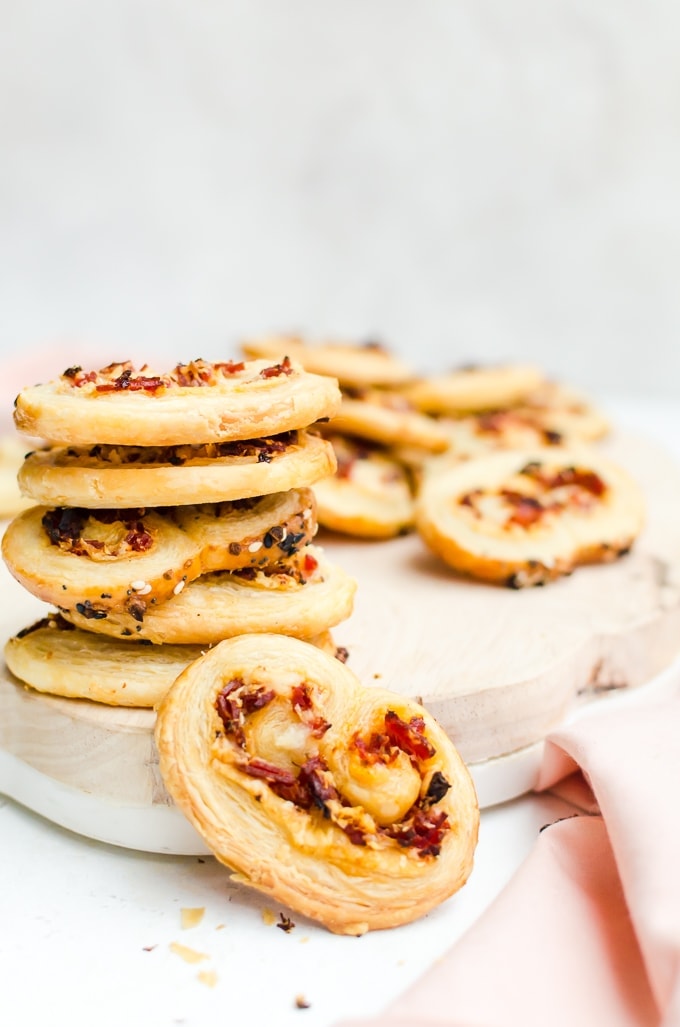 And while we are at it, technically, any cheese will work, but none will compare to the Cello Parmesan and Romano. Not only is the quality really good, but they are actually convenient to get as they can be purchased at a Sprouts or ShopRite.

How to Fold Palmiers

Apparently, this question gets asked a lot, so I thought I'd take a couple of moments to briefly go over the technique used to fold palmiers. First, there isn't any real technique at all. If you've ever rolled anything... cinnamon rolls, your school paper, anything... you can shape your palmiers.

First, let's pretend you evenly spread your cheese, pepperoni, and sundried tomatoes over the entirety of your puff pastry already. Now, you take one of the long sides and slowly do a tight roll. I start off by folding over the very border and pressing it down slightly. Then fold it over again once more. From there, you should be able to just begin to roll up the puff pastry. 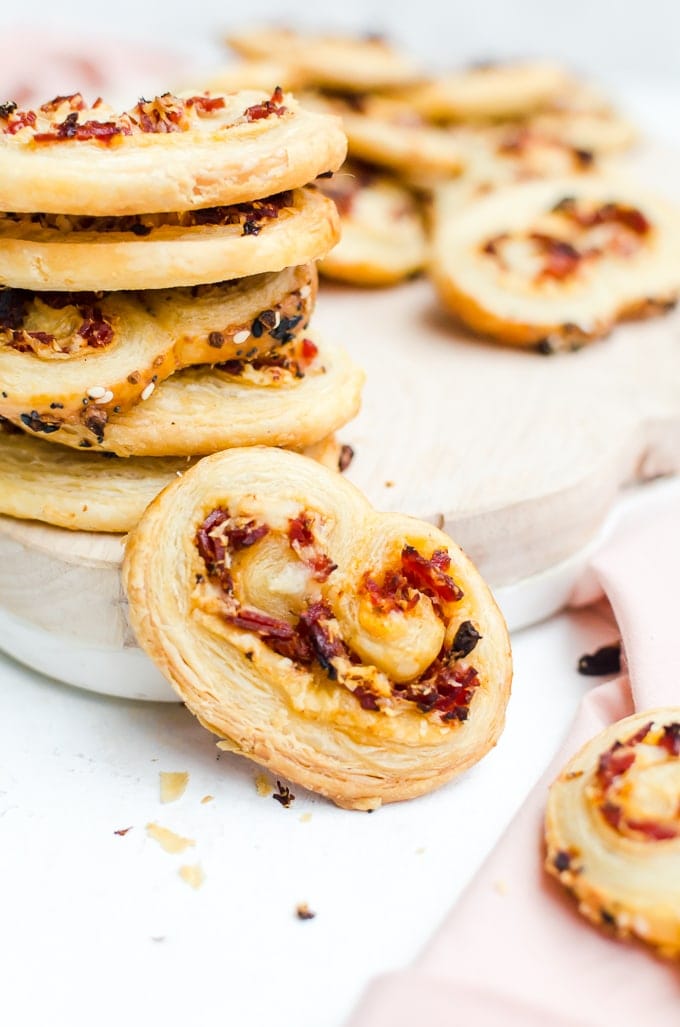 Next, you want to stop right when you reach the middle point of t

he puff pastry. Don't worry if it isn't at the exact mid-point. I like to leave something next to my roll so it doesn't get tempted to unroll. Now, roll up the other side the same way you did the first until the two rolls touch. Brush the middle, top, and sides of the rolled up pastry.

The egg wash will help the two rolls to stick close, but I will leave something on either side of the rolls to keep them together as I freeze the roll. Freezing is important!!! It makes cutting out the palmiers so, so much easier. Don't skip it.

Once baked, the Cello cheese will hold all that deliciousness together. 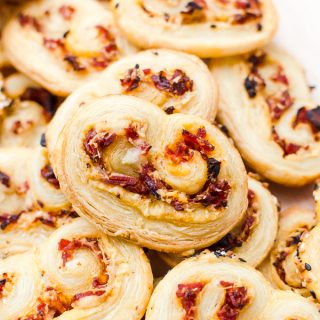